To: All government leaders of the world and international organisations
More than 200 girls are missing in Nigeria – PLEASE FIND THEM!
Petition by Ify E. from Bonn, Germany

This crime is of deep concern to us all, because these girls are also our children, for whom we all carry responsibility and whom we are obligated to protect and rescue through concerted international action. So let’s speak out across the world with ONE voice to find these girls and to bring them home safely. By doing so, we shall be sending a clear message to all persons in positions of government and other positions of responsibility around the world that we as a responsibility-conscious world community must be optimally prepared from this point forward to immediately implement life-saving and efficacious measures worldwide in order to nip any such crime in the bud. If you want to help rescue these girls and create a safe world for all human beings and for all life on Earth, please sign the following petition at change.org:

Let’s bring back our girls!
If we as a world community are not capable of protecting our own children, then who is?
by Rebecca Walkiw, Germany

The world community is urgently called upon to coalesce and work together in support of the global struggle to deter crimes against life and humanity such as the abduction of 276 school girls from a boarding school in Nigeria in order to assist the affected population at the locality of the crime in a becalming and peace-building form and to effectively protect the human life there – especially the life of the children – but also to put a definitive halt to the activities of the criminal gangsters, namely the highly dangerous Boko Haram sect in this particular case. In order to be able to ensure the peace and the safety for all life on Earth, the world community however is in urgent need of a multinational peace-fighting troop – composed of male and female peace-fighters from all countries of the world – that is prepared at all times to actively and decisively oppose crimes of any kind throughout the world with the use of logical force in order to restore peace at the respective locality of unrest as quickly as possible and to defend the human life there via personal engagement (action, combat) and if necessary also with the use of arms.

As a global humanity, we must at long last recognise that we alone bear the responsibility for all things that happen on Earth and are entirely capable of steering all misfortunes in a more positive direction, if we only realise our strength and bring the might of our thoughts in line with a change for the better and act accordingly. This also applies to the struggle or fight for world peace because only with the help of a planetary defence system in the form of a multinational peace-fighting troop will we as a world community finally be in the position to resolve and diminish conflicts and crimes step by step around the world, so that enduring peace shall ultimately triumph on Earth. A peace-fighting troop, mind you, has absolutely nothing to do with warfare and claims for might, since its sole function is to implement protection and the logical use of force, whereby it always acts in accordance with the law of active non-violence. This means that on the sole basis of its multiply (at least 10 times) superior number of peace-fighters, it can squelch the very onset of any conflict. If need be, the peace-fighters also resort to armed force in order to save human life or to halt a conflict or crime when the assailants refuse to give up.

In contrast to a combat-ready multinational peace-fighting troop whose highest and topmost priority is to secure world peace and to protect and defend human life – if necessary with armed force – the currently existing UN peace-keeping troops, i.e. ‹blue helmets› with their entirely passive surveillance operations are not at all suitable for the fight against life-threatening terrorists like Boko Haram, because although they are armed, they are neither trained in the art of the logical application of force, nor are they permitted to defend the population with arms in order to save human life. What a blatant unlogic, when one considers that their first and foremost duty as guardians, i.e. defenders of world peace should actually be to protect and to save human life. In the case of the abducted girls, this means to find the girls as quickly as possible, to defend their life through personal engagement and if necessary with armed force and to ultimately bring them to safety. But it also means to disarm the dangerous criminals, to take them into safe custody and to bring them before a court of justice, where they must answer for their criminal activities.

To protect the population, the culprits logically (i.e. in line with creational and naturally given laws such as the law of active non-violence, the law of life-preservation, the law of love, etc.) must be sorted out of (isolated from) society by decision and order of the world community and brought to an absolutely secure and unleaveable sanction-fulfilment site (detention centre) – such as an island or a fenced-in area of land – where they must work with their own hands and out in nature for their daily sustenance, but must also be instructed in the sense, purpose and value of true humanity and a dignified human behaviour towards themselves and all life, i.e. all beings.

For more information on the topics of ‹a multinational peace-fighting troop›, ‹misbehaviour and corrective measures›, ‹sectarianism and religious fanaticism›, see the following links:

Worldwide Outlawing and Abrogation of the Torture and the Death Penalty: https://www.change.org/petitions/worldwide-outlawing-and-abrogation-of-the-torture-and-the-death-penalty-weltweite-ächtung-und-aufhebung-der-folter-und-todesstrafe

Prophecies and Predictions by BEAM: http://www.futureofmankind.co.uk/Billy_Meier/Prophecies_and_Predictions

As a result of the abduction of the school girls in Nigeria, I have selected from the aforementioned ‹Voraussagen und Prophetien 1951 und 1958› by BEAM, i.e. ‹Billy› Eduard Albert Meier, also called the Mahdi in some places on Earth, four very promising predictions for all children and also women of this world, the realisation of which must first be hard-earned by all human beings of Earth, but which nonetheless shall come to pass with absolute certainty in the course of the Third Millennium. The specific period of time up to the onset of the predicted transition (developmental change) is therefore dependent on the efforts of all human beings and ultimately on how long it will take until the bulk of humanity turns to the teaching of the spirit, teaching of the Creation and teaching of the life and begins to live in consonance (harmony) with the creational-natural truth and its reality. See also BEAM-Portal: http://beam.figu.org and ‹Who is the person named the Mahdi/Mehdi mentioned in Islam?›: www.figu.org/ch/verein/periodika/sonder-bulletin/2007/nr-38/mahdi/mehdi-engl

Following are four predictions from the years 1951 and 1958 by ‹BEAM›, i.e. ‹Billy› Eduard Albert Meier, for which it is well worthwhile for every human being to take up the inner as well as the outer struggle for peace:

140) The human beings of Earth shall sit up and take notice and hear the teaching of the prophets, because finally they shall learn to see with open eyes and to understand one another, and each shall be knowing, that when one human is smitten or injured with words, that the other feels pain.

141) It will be the time, at which the human beings out of humanity (humaneness) shall become one and understand that each one is a small part of the next one (fellow human being) and that only the unity (oneness, coalescence) makes strong and neither skin colour nor belief, but only the commonality (e.g. basic human dignity, universal values, true humanity) and the effective truth with regard to the Creation and its laws and recommendations are of importance.

151) And at that time it shall be, that no longer the man alone shall be the mightiness of rulership (mightful ruler), from then on namely the woman shall steer (guide) the foreordination (destiny) of the world and humankind as true mother of the Earth, for she shall wield her sceptre over the man and break his imperiousness, self-glorification, greed for might and pathological craving for war, in order to bring the ugly male barbarity (inhumanity) to an end and to nip the devilish and murderous as well as self-glorious deeds of the man in the bud, in order to finally allow peace to blossom on Earth.

153) And it will be at that time, when no longer religious and sectarian belief, but only the pure truth of the Creation and its principles shall have validity, whereby the happy days of humankind begin and the human being again discovers the human being and recognises and honours him or her as his or her kind (fellow human being).

The Peace Symbol and the interpretation
(from FIGU-Sonder-Bulletin Nr.76, April 2014) 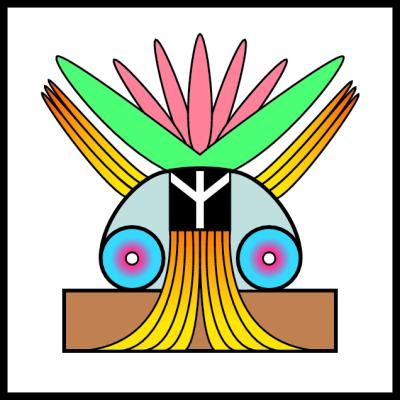 Distribution and sharing of all information contained herein
are expressly desired! 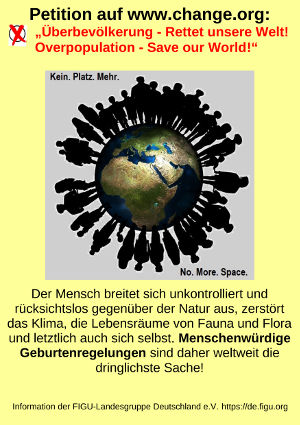